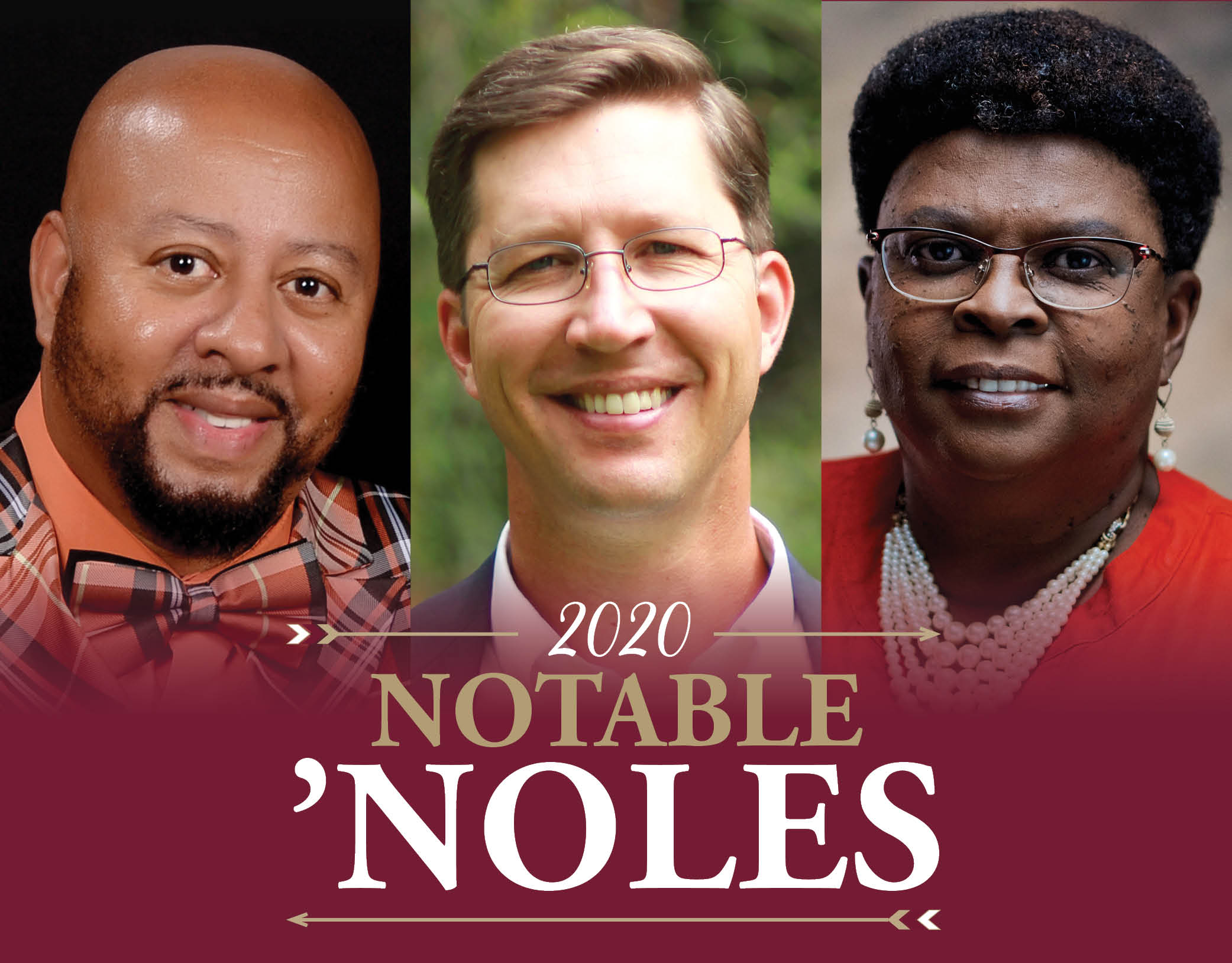 The award is given to FSU Panama City alumni who demonstrated excellence as students and have made outstanding contributions to the community and within their careers. Since the award’s inception in 1996, FSU Panama City has recognized 80 Notable ’Noles, accounting for less than 1 percent of the campus’s alumni.

Five years after his retirement from the Air Force, Albert Jesse “A.J.” Bacon Sr. (’12, ’14) enrolled in the social work program at FSU Panama City to fulfill his calling to serve others.

While a student, Bacon served in the AmeriCorps, logging in 339 hours over the course of a year, while assisting clients in applying for jobs, developing employment skills, improving life skills and overcoming employment obstacles. As part of the FSU International Study Program in Durban, South Africa, Bacon spent 21 days studying international disaster relief and recovery as well as the dilemmas of assisting refugee populations consisting of mixed languages and cultures. In 2012, he received the FSU College of Social Work Humanitarian of the Year Award and the National Society of Student Social Workers (Emerald Coast Division) Student Social Worker of the Year.

After earning his bachelor’s and master’s degrees in social work from FSU Panama City, where he was a Garnet and Gold Scholar, Bacon became a dependency case manager for the Children’s Home Society of Florida Emerald Coast Division. He was named Big Brothers and Big Sisters of Northwest Florida Virginia Thomas Big Brother of the Year 2015-2016. He is now a minister at First Mt. Moriah Missionary Baptist Church in Springfield, Florida, as well as the chapter service officer for Disabled American Veterans (DAV). He continues to dedicate himself to mentoring youth, working to prevent youth alcohol and drug abuse, and advocating for veterans by volunteering at various local organizations.

In 2020, during the COVID-19 pandemic when help was needed most, Bacon and his wife, Ivy, created the A.J. and Ivy Bacon Scholarship Fund to help students at FSU Panama City. Combining his passion for helping others and his military service, the scholarship gives preference to students pursuing a degree in social work or student veterans.

“A.J. is truly a man of integrity,” said nominator Pat Sabiston, executive director of Crossing Paths, Inc. “He is a man of God and not afraid to stand up for what he believes. He was an integral part of the Crossing Paths board, especially considering his dedication to veterans in this community. I know he loves his alma mater and I can’t think of a more ‘notable’ person for this honor.”

At 36 years old, Kevin Elliott (’13) embarked on a new journey. Tired of grueling in the Panama City summer heat for his property management company Service Meisters, Elliott decided to build on his bachelor’s degree in theology from Florida Baptist Theological College and enrolled in FSU Panama City’s master’s program in corporate and public communication.

Since then, Elliott has become a familiar face in Bay County as a senior marketing and communication manager for Applied Research Associates, adjunct public relations professor for FSU Panama City, and co-founder of Wewa Films, a production company that creates everything from documentaries to corporate storytelling videos to web and TV series.

“Kevin Elliott is everything one could desire in a Notable ‘Nole,” said Glen McDonald, vice president of strategic initiatives and economic development for Gulf Coast State College—and one of the nominators. “His FSU PC degree has served him well…”

An award-winning video writer, producer, and national public speaker, his accolades include American Advertising, Telly, and Hermes Creative awards as well as having his writing featured in publications including The Washington Post, Business Energy, Power Engineering, Public Roads, Desktop Documentaries and The Military Engineer.

“I met Kevin in 2014 as an adjunct professor and was so impressed, I asked if he wanted to be a ‘thinking partner,’” Jack Kerigan, owner of Kerigan Marketing Associates (KMA) said in his nomination. “We met for a number of long talks to discuss marketing and business strategy, then I hired him as our first digital marketing director at KMA."

Elliott has lived in Panama City since 1988, when his father was stationed at Tyndall AFB. He and his wife, Kathy, have two daughters, Allison and Annie, as well as 15 chickens.

Third generation Bay County resident Janice Lucas (’89) has dedicated herself to empowering others through education and activism. Her ability to connect with people has earned her many accolades as a journalist, middle and high school teacher, college professor and community leader.

Lucas holds a master’s degree in English education from FSU Panama City as well as a bachelor’s degree in broadcast journalism from Florida A&M University.

In 2014, after a string of murders driven by gang violence and drugs rocked the Bay County community, Lucas facilitated local leaders and community response that ultimately became the LEAD Coalition of Bay County. LEAD is an acronym for Leadership Empowerment Authentic Development. As the executive director for the organization, Lucas works with the community to build trust, increase safety and restore neighborhoods.

Demonstrating her commitment to the community through LEAD and service to other local organizations, Lucas continues to bring awareness, change and much-needed funding to our area’s most underserved children and families. In 2015, she obtained a $325,000 21st Century Learning Community Grant, which helped fund afterschool STEM enrichment programs for local underserved middle school students.

“She works hard, she has a vision of how things should be for her community, she is not afraid to stand up for what is right, and she remains dedicated to making Bay County a better place for all,” Ginger Littleton, former FSU Panama City STEM Institute director, wrote in her nomination. “To me, that is the definition of what we all expect when we bestow on someone the title of Notable ’Nole.”

Click here to view past Notable 'Noles or to submit a nomination.