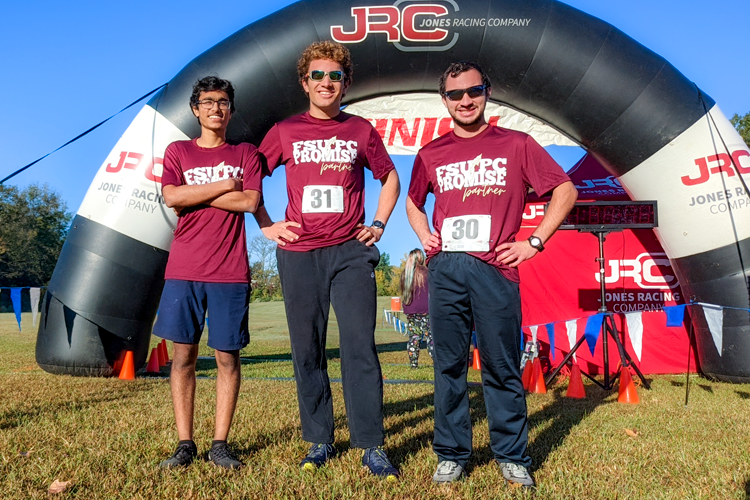 “Intramurals is a really cool thing. If there are only three or four people, you can still play,” said Intramural Sports Coordinator Mason Taylor, ’21, who was hired in October to help lead the sports program at FSU PC. “Intramurals also are flexible; you don’t have to be at every practice or every game.”

All students interested in flag football and soccer are invited to meet 6-10 p.m. Wednesdays and 1-4 p.m. Saturdays for free play at Frank Nelson Park, 4105 W. 23rd St., through an agreement with the City of Panama City.

“Tournaments depend on how many Gulf Coast State College students and FSU PC students you have,” Taylor said.

The players decide how to pick and divide their sports teams for games or tournaments, as well as whether to have the schools compete against each other or to have one registered student organization (RSO) compete against another. There’s even the opportunity to play against colleges from other areas if players are willing to travel.

“This is the first time in a number of years we’ve sent off a team like that,” said Randy Hanna, dean of FSU PC.
The track team has been meeting at 6 p.m. Mondays and Fridays and 7 a.m. Wednesdays in front of FSU PC’s Holley Building.

“We go out every Monday, Wednesday and a few Fridays and run around campus,” said business student Zach Murzyn, ’25, who added they sometimes run the Hathaway Bridge. “We are working on a solid schedule.”

Murzyn is a high school graduate of North Bay Haven Charter Academy, where Franklin is a cross-country coach. Murzyn and Franklin formed the FSU PC track team at the end of September.

“The hardest thing right now is getting student involvement,” said Murzyn, who hopes more students in Seminole Landing will join. “Once everything picks up and the guys in the dorm find out about it, hopefully, they will come out. It’s a social thing to have a group to be a part of.”

Other sports up and running at FSU PC include volleyball, with a group meeting at 4:30 p.m. Sundays at the volleyball courts by the beach.

While FSU PC has had limited sports activities on campus in the past, the opportunities recently have grown with more students on campus.

“When I first arrived, we had flag football, quidditch and a bass fishing team, but Hurricane Michael took care of that. And then COVID,” said Dr. Irvin Clark, Associate Dean of Student & Strategic Initiatives. “Now that we have residential housing, we have enough critical mass. I had a couple of meetings in mid to late September and found out there was a tremendous amount of interest. It’s about forming partnerships.”
Clark is working on a package with the local golf clubs for students to play golf.

“This initiative is sponsored by the Dean’s Office,” Clark said. “There are a lot of moving parts, and we are a work in progress.”

They are trying to secure a partnership for a boat to bring bass fishing back to campus, and Taylor is looking to resurrect FSU PC’s Quidditch Team for the spring.

GCSC currently hosts basketball on second and fourth Wednesdays from 7 to 9 p.m. and weightlifting in the weight room 10 a.m. to 2 p.m. Saturdays.

Taylor is meeting with GCSC about initiating a kickball competition between both schools next semester, as well as starting a ping pong league.

“I think students are looking to get out and take their minds off studies,” he said.

Taylor graduated from FSU PC in ’21 with a Bachelor of Science in hospitality and tourism management and is pursuing his Master of Science in Corporate & Public Communications. He sees his new role as a way to combine what he’s learned in event management with research skills he’s learning in the graduate program, such as sending students questionnaires and surveys to gauge interest in sports. Taylor manages the Intramural Sports schedules and equipment supplies, and he is on working on creating T-shirts for flag football.

“With anything new, it’s always trial and error. Being able to be adaptable is the most important part of this role,” Taylor said.